It’s a cheese board with a glass cover. I’m pretty sure it has a name, but don’t know what it is. Anyway, it is great because good cheese shouldn’t be served or eaten cold. And if this is empty, it’s a reminder to get the cheese out of the fridge in time. I’d better go get mine out now.

Saw it at World Market for $20. They had one, and I bought it on the spot. WooHoo.

The wok and the pot.

Back in the day, the late 1960’s/early 70’s, living in Newton, Massachusetts, an urban suburb of Boston, we discovered the Joyce Chen Restaurant in Cambridge. We came in 1968 from Roanoke VA, where nearly everything new and good was “over the mountain” from us. Cambridge was a revelation! Everything was new and different and good, from Design Research to good Chinese food.

THE WOK
We went to Joyce Chen on celebratory occasions, often with a like minded group, as the restaurant had big round tables with a lazy susan in the middle. Joyce Chen had a cooking show in WGBH, the Boston PBS station where Julia Child honed her TV chops.

Joyce Chen’s restaurant was on the second floor of a three story wooden building in Cambridge near Central Square, a neighborhood less toney than Harvard Square; a place where new restaurants got their start. Legal Seafood started there at about the same time; another venue celebrating good food that has grown and flourished.

Joyce Chen was content with her single location, but soon enough, she opened a store on the street floor where she introduced a line of Chinese cooking utensils. I’m pretty sure I bought my first wok there, a big, steel 14 1/2-inch wok that over the years has become well seasoned. I still use it.

Eventually, her name and influence in the restaurant and design world faded. Joyce Chen died in 1994 and her restaurant closed in 1998.

In 1992 my wife and I moved to San Francisco. I moved three months before her, and in barely equipping a temporary bare bones kitchen, bought a small black aluminum calphalon wok shaped pan, only 8 inches in diameter. When Carol arrived with our furnishings and cookware, it got buried the cupboard. END_OF_DOCUMENT_TOKEN_TO_BE_REPLACED

On the first Saturday of the month in the early 80’s in Newton, Mass., I would put boxes of green, brown and clear glass into the trunk of the beige Volvo and make my way across town to the dump. Bins were located there to receive the glass. I don’t remember aluminum cans or paper.

The facilities at the dump got better over the years, but when we moved to San Francisco in 1992, there was still no curbside collection of recyclables in Newton. (Newton now has curbside pickup, they’re using the blue and green bins.)

We live in a building with two flats; our landlord, John, living above us. As part of our move-in process, he explained the trash and recycling, which we combine and he pays for. At the time, we put glass and cans in blue bins to leave by the curb. Paper had to be bundled and put beside the bins. More often than not, “recycle entrepreneurs” would come ahead of the trucks and claim the aluminum cans from the open bins. They still got recycled, but the money went to the “recycle entrepreneurs” rather than the recycle company, jeopardizing the service.

About three years ago, we were given wheeled carts with hinged tops to replace the bins: brown for trash, blue for recyclable bottles, cans and paper and green for compostables. I never bothered with the compostables, too messy; besides, restaurants generate a lot, but little ol’ me? Not much. END_OF_DOCUMENT_TOKEN_TO_BE_REPLACED

I have found, the greatest refrigerator storage container of all time.

Here is my storage container cupboard. 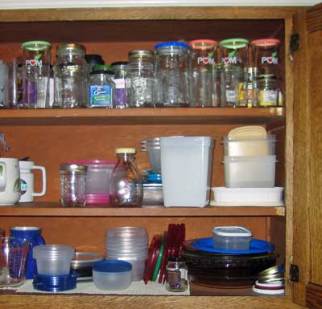 I’ve been to the kitchen store and hardware and Safeway and found dozens of styles of plastic containers with snap on plastic lids. I’ve recycled mayonnaise jars and pickle jars.

The plastic containers are not clear, are squat in shape, and the lids are flimsy and can tear with frequent use. Those are $3.99 for 3 of the 2 cup size, or a buck-thirty-three each, and they’re empty. END_OF_DOCUMENT_TOKEN_TO_BE_REPLACED