We have a guest columnist this week. My brother-in-law, the Honorable Jon Hale, Lancaster (Ohio) City Councilman, sent this to his sister, my wife, knowing full well that I write and publish eatsforone. Jon vs. Food is hereby reprinted, in its entirety, with permission.

So, the Max & Erma’s chain – corporately based in Columbus with decent food, but admittedly not nearly as fun as when they used to feature phones on each table – has introduced their own eating contest called the Landfill Burger Challenge.

“Complete a huge 4.5 pound three-pattie burger piled up with multiple cheeses, onions, lettuce, tomato, mushrooms, fried pickles, salsa, guacamole, ham and pulled pork, plus a generous one pound serving of chili cheese fries and you win a t-shirt, commemorative photo displayed and a gift card for your next visit.”

Since the beginning of July only one person from seven who’d tried had actually done it, until Saturday, August 4.  Having watched “Man vs Food” over the past few years and hearing Michelle (wife) comment “You could do that” numerous times, I decided to actually give this a try once it came to Lancaster.  Out to dinner with friends Ed & Pam H and Michele, I confidently ordered the Landfill. The rules are that once started you cannot get up from the table and cannot receive assistance from anyone. There is no time limit, but aside from the ultimate goal of being a clean-plater, my first goal was to try to beat the 43 minute time set by the other guy (friend Michele offered to buy me a beer if I could do it in 40 minutes). It soon became apparent that wasn’t going to happen, even matching the other guys 43 minutes wasn’t in the cards either – so, I decided to shoot for under an hour. 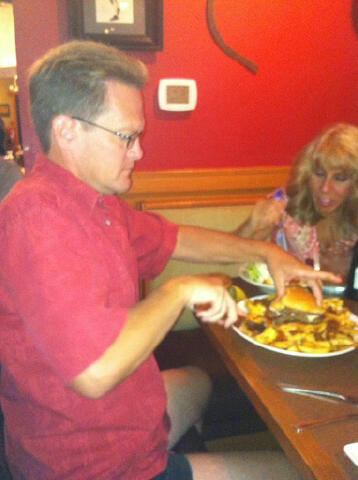 I found that Adam Richman isn’t kidding when he talks about hitting a food wall – 30 minutes and about 2/3 of the Landfill gone was my wall, but I steadily kept going.  Under the encouragement of my dinner companions, as well as a genuinely supportive wait staff, the final bite went down at the 54:24 mark! 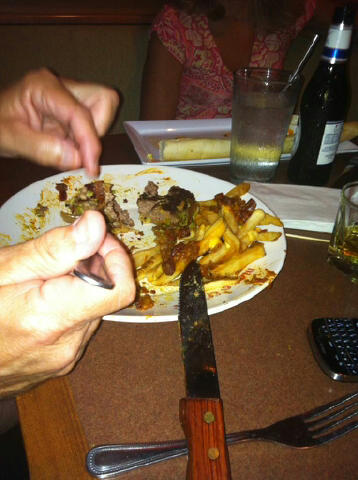 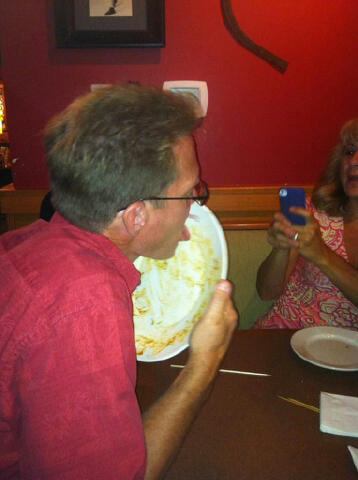 Surprisingly, I was very full, but not all that uncomfortable.  Three laps walking around the restaurant helped, as did getting up to pose for my commemorative photo.  The next day, as promised to several friends, I even wore my t-shirt to church.  Facebook has been well adorned with photos and accounts, and I’m glad I can scratch this one off my list of things to try to do!

The Landfill also had bacon on it too! Mmm, bacon… 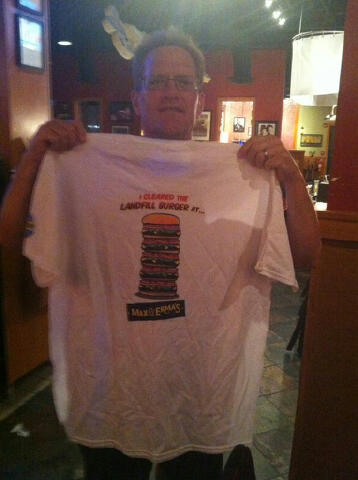 Sent from my Verizon Wireless BlackBerry