… and a swell macaroni salad
… and a vibrant rice salad for good measure.

Back in the day, Looing Sauce was a staple in our household. It is a soy sauce based liquid used for poaching meat, primarily chicken, never fish. We glommed onto it back when Jeff Smith’s The Frugal Gourmet Cooks Three Ancient Cuisines: China – Greece – Rome was brand new, 1990. I was a big fan of his TV

show and bought the book when I was home on R and R from Jerusalem. I kept jars of Looing Sauce in the refrigerator and used it – at least – once a week. I transcribed it and included it as an early entry in my developing eats4one cookbook.

Years passed and it kind of got lost in the shuffle when we moved to San Francisco in 1992.

Recently, I bought a small half chicken – just 1.8 pounds – at the Mountain Ranch stand at the Saturday Market.

What to do with it? Hey, we haven’t had Looed Chicken for a while. I couldn’t find it in my computer recipe files. I still have the book, of course, but its gotta be somewhere on the computer. I went into the archives and found it in the original eats4one and made a copy for my active files.

I had to go out and find star anise. I still had some broken pieces in my spice cupboard, but its gotta be 20 years old. How else does one use star anise? So I whipped up a batch, and poached my little chicken.

OK, it ain’t pretty, but it sure tastes good and looks way better on the plate.

I served it over rice with a side of Romano beans and tomatoes. Oh my… it was nice and moist and flavorful.; better than I remembered. Way to go Frug.

Even with that little bitty chicken, we had enough bits and pieces of meat left over to make a swell macaroni salad. When I did this year’s Super Bowl Party I fashioned a macaroni salad with ham, based on a Cooks Country recipe for BBQ Macaroni Salad. They add BBQ sauce to the mayonnaise and it was pretty good. In my version using Looed Chicken, I substituted Looing Sauce for the BBQ sauce. 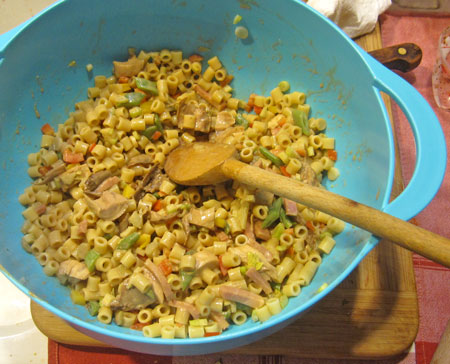 Heirloom tomatoes were just in season, and I had a good many I wanted to use. Tomatoes would make a good counterpoint to the rich looed flavors. I could have made a nice tomato salad, but nooooooo… Going way over the top, I maxed out the carbs and made a rice and tomato salad. Never boring, always pushing the envelope is my mantra. 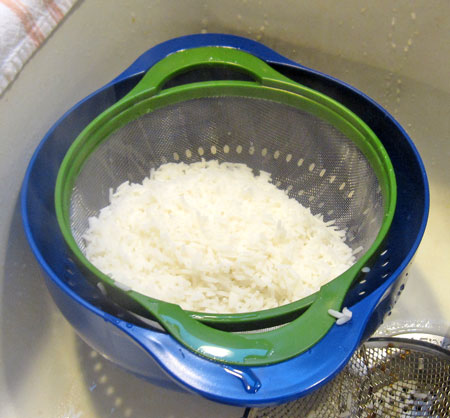 I cooked the rice in my new favorite throw-it-in-boiling-water-like-pasta method, giving me a chance to use most of the components of my snazzy new MOMA set of stacking bowls – 2 bowls, a strainer, a colander and a set of measuring cups. 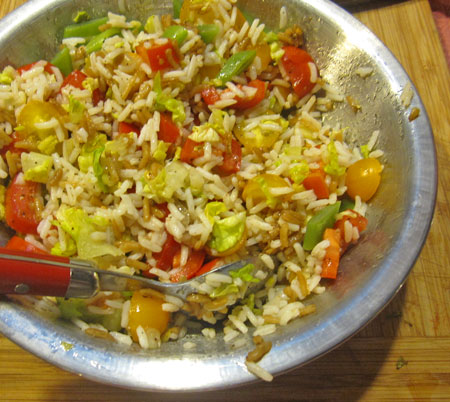 So that turned out to be really good and surprisingly balanced. The starches were treated so differently that it didn’t seem like overload at all.

I thought it might make a good picture to serve both salads in bowls, rather than on a plate.

LOOING SAUCE
The Frugal Gourmet, 3 Ancient Cuisines
This sauce can be used over and over again, as long as you keep it refrigerated and bring it up to boiling before each use.

Mix all together in a stainless steel pot and bring to a boil. Do not put fish of any kind in this sauce as it will be ruined, but chicken, duck, goose, quail, pork, beef and even lamb will do nicely. A bit of sesame oil and green onion garnish are added just as the dish is served.

Place enough Looing Sauce in a 6 quart stove-top covered casserole to cover the chicken. Bring the sauce to a boil and add the chicken. Cover and turn to a simmer. Cook for 30 minutes and turn off the heat, allowing the chicken to cool in the sauce for 1 hour. Take the chicken out of the sauce and garnish with a bit of sesame oil and chopped green onion.
Return the sauce to its jars and refrigerate. Pick fat off the top before its next use.
I’ve done with pieces: for a couple thighs or a breast, simmer about 20 minutes and let sit for 30 or 40. Good over noodles or rice. The meat is good cold, too.

I have a leg, couple wings and about half-a-breast of a small looed chicken… scant cup, picked. Plus a quarter-cup diced ham.

1. Bring 4 quarts water to boil in large pot. Add 1 tablespoon salt and macaroni and cook until nearly tender, about 5 minutes. Drain in colander and rinse with cold water until cool, then drain once more, briefly, so that pasta is still moist; transfer to large bowl.

Stir in bell pepper, celery, Romano beans, scallions, cucumber, vinegar, hot sauce, chili powder, garlic powder, and cayenne pepper, and let sit until flavors are absorbed, about 2 minutes. Mix mayonnaise and looing sauce and stir into vegetables and pasta. Let sit until salad is no longer watery, about 5 minutes. Season with salt and pepper and serve. (The salad can be covered and refrigerated for up to 2 days. Check seasonings before serving.)

Cook some rice.
Peel, seed and roughly chop some heirloom tomatoes.
Whack up Belgian endive and lil gem lettuce.
Sliver your leftover Romano beans (or green bell pepper)
Make a vinaigrette.
Mix all that together and serve. 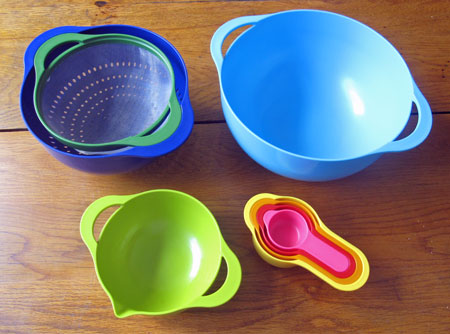 One thought on “Looed Chicken”