Food and the Super Bowl 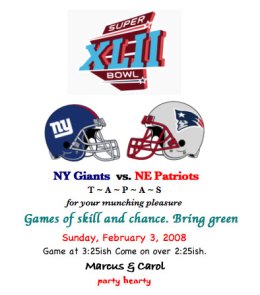 This year we hosted our XIth Annual Super Bowl Party for Super Bowl XLII, the New York Giants vs. New England Patriots. Having lived in Newton, Massachusetts for 24 years while raising our kids, we are dyed-in-the-wool Patriots fans; but not all those invited shared our views.

In years past, we themed the food around the teams playing (Baltimore Crab Cakes, Carolina BBQ, are examples,) but last year we ran up against Indianapolis. What the heck would you do with Indianapolis??? So we punted and did a country ham, because we like country ham.

In any case, this year we had some good theme choices (New England Clam Chowder vs. Manhattan Clam Chowder, Lobster vs. NY Steak,). We recently returned from Europe, and particularly Spain, where we delighted in the Tapas. What great food for a party, finger food, little paper plates are good; eat bites of what you want, when you want, as much as you want, throughout the game.

This is the pre-game and first half spread, the appetizers. Let’s start bottom right and move counterclockwise: green and yellow bell pepper strips, Potatoes Stuffed with Boursin and butter (recipe below), little baby French breakfast radishes in the same bowl with very young carrots (the ones out of the ground, not the ones from some lathe-like machine), a bowl of T. Marzetti’s Ranch Dressing for dip, cauliflower, now turn left to broccoli, marinated mushrooms, oil cured black olives, Picholine olives, smoked anchovy stuffed olives, little paper plates and plastic forks, celery sticks, and at six o’clock, son Eric’s Dilly Beans.

Looking from the other side of the table, Salmon Pate spread on Focaccia at 12 o’clock, clockwise to halved raw mushrooms, Manchego cheese cubes, two plates of Hale Hollow Ham Loaf on sliced baguette and pumpernickel slices, and finally, Fra’Mani Salametto Piccante, sliced (a big hit).

For half-time, we put out a Potato Tortilla (recipe below), Paula’s deviled eggs, Leslie’s spinach puffs and the three kinds of ham, Jamon Serrano, Speck Smoked Air Cured Ham, and Prosciutto San Danielle. (Sorry, the guests got to the table before I got there with my camera.) (Note: Sarah’s Meat Bombs, not pictured, recipe below, went quickly from oven to mouth, on demand.)

THE GAME(S)
In the top photo, the cups on the right look like dollar bills might be sticking out of them. Surprise, money changes hands at super bowl parties. At ours, it’s wholly voluntary and among friends. Those cups are for the dollars riding on certain proposition bets, silly things like:

In the second picture, you can see a big glass pitcher on the left. That has dollars for the pool bets on the bottom of the bet sheet.

Well, I didn’t win the games of chance (Carol did, though) and my team didn’t win, but I had great fun making the menu, preparing most of the food and hosting the party.

FOOD IN THE AFTERMATH
The day after the Super Bowl, I went to a talk and book signing by Michael Pollan regarding his new book, IN DEFENSE OF FOOD, An Eater’s Manifesto at a local bookstore. His mantra is on the cover: Eat Food. Not Too Much. Mostly Plants. I’m reading the book and urge you to do so, as well. Michael Pollan is an engaging speaker and packed the house. He has a lot to say and his talk was peppered with humor. You can see an NPR story on the book here.

Back home, Carol had already eaten dinner. With Pollan’s words in my head, I started my dinner. Leftovers from the Party crudités were in plastic bags in the crisper, and I had saved the trimming scraps from the prep, as well. Yellow and green bell peppers, broccoli stems, and celery sticks, as well as some slices of the Speck ham would make a nice stir-fry.

I sliced an onion and sautéed it in olive oil, added the other vegetables and cooked those with a little white wine until it had nearly evaporated. While that was going on, I sliced the ham into strips and stirred those in along with some beef broth. That cooked down nicely for a few minutes and I had dinner.

Food. Not too much. Mostly plants. Yum.

Then Tuesday, for lunch, I mixed the leftover stir-fry with noodles and a touch more broth. Oh, my, Yum!

Trim the top and bottom of each potato to make flat
Hollow out each potato with a melon baller
Pipe stuffing into hollow (cut corner off plastic bag method)
Serve at room temperature.

Potato Tortilla
This recipe from SF Chronicle columnist Jacqueline Higuera McMahan is really a potato cake barely held together with egg. In Spain, the tortilla is cooled and cut into wedges. It is served at tapas bars at room temperature. The wedges are great as appetizers or with a salad for lunch, and leftovers are good the next day. Serves 8 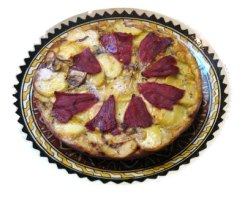 INSTRUCTIONS:
Preheat the oven to 425 °
Place the potatoes and onion in a bowl and toss with 2 tablespoons of the olive oil, the thyme and salt. Spread out the potato slices and onion in a heavy, dark 10 x 12-inch pan, preferably nonstick. Roast for 25 minutes or until browned and caramelized on the bottom. Remove to a bowl and let cool for 15 minutes. Add the pepper and more salt, if needed.

Reduce oven temperature to 350 °. Add the remaining tablespoon olive oil to a heavy 10-inch skillet and place over medium heat. Swirl the pan to coat the sides. Pour the eggs into the bowl with the potato-onion slices. Turn the slices to coat everything well. Pour into the hot pan. Arrange the red pepper halves in a sunburst circle. Leave the pan over medium heat for about 2 minutes. Place in oven and bake for 25 minutes or until there is no uncooked egg remaining. It should feel firm when pressed in the center.

Cut the top of a Sourdough roll, leaving a hinge of crust. Hollow out the roll.
Stuff the roll with a ground beef gumbo mixture.
Close the top of the roll and wrap tightly with aluminum foil.
Bake in a 350 degree oven for 25 minutes.