Isn’t that a beautiful dish?

Lovely to look at, easy to prepare and it tastes good. What more could one want?

I got it from The Wednesday Chef who got it from Bon Apitite’s 50th Anniversary Cookbook via the LA Times. The Wednesday Chef calls it Barbara Fairchild’s Spicy Roast Chicken.
I made it the day I read about it, couldn’t be easier.
Take cherry tomatoes, toss them with olive oil, crushed red pepper, garlic and rosemary. Put your bone-in chicken breasts in a shallow casserole dish, pour over the tomato mixture and bake. 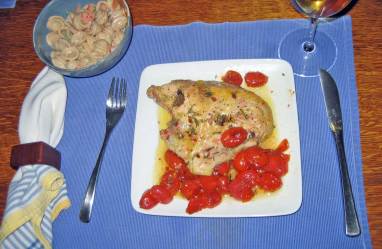 Soup for Lunch
But the unexpected bonus came days later, when I asked myself the musical question, “What’s for lunch?”

I could open a can of soup. I thought I wanted soup, San Francisco had been going through a weeks long chilly spell and I needed the warmth of soup.

I scanned the refrigerator for leftovers and found the end of that bone-in chicken breast that had been braised with cherry tomatoes, including 4 or 5 tomatoes. Also found a little container of tatsoi leaves left over from the last congee and half of a red onion. Looked like the makings for soup.

I chopped the onion and put that on to melt in some olive oil. Meanwhile I diced a potato into a small dice, threw that in with the onions and gave it a stir. I poured in a can of chicken broth and while that was coming up to a boil, picked the chicken, not much meat on them bones.

Once the soup got to boiling, I threw in the chicken bits, tatsoi leaves and cherry tomatoes, added salt and pepper and a little hot sauce and simmered for about 5 minutes.