I like poached eggs, but not the mess of poaching them, and while I do them pretty well, there are many opportunities to mess up.

Well, what do you know? I was looking on Epicurious.com for some recipe or something and saw an ad for a foolproof-five-fork-rated egg poacher reduced 25 percent for Epicurious readers.

Why debate? I just won many $$$ in the RectorFootball pool. A couple clicks and a few days later and that big boy was in my kitchen. There was even an empty spot in the pantry to store it.

My first beautiful poached eggs — served over leftover chili from the Sierra Canyon Great Balls of Fire Chili Cook-off — was not a disaster. Neither were the results perfect. This egg poacher has an inherent problem; it is not a poacher, it is a steamer. To poach something, one would immerse it in liquid. With this “poacher,” one places an egg in a cup, suspended over boiling or simmering water, so the egg cooks in steam. Big difference. 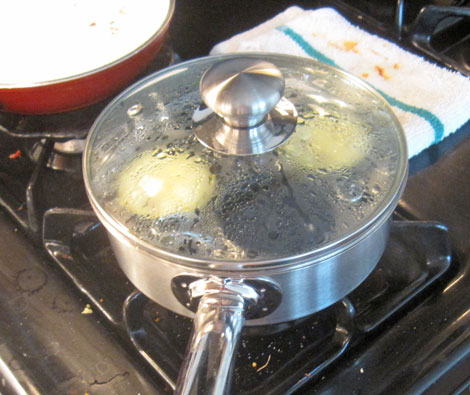 Thus, the whites don’t etherially wrap the yolks, but rather, wrap the yolks fairly firmly. Nevertheless, the result is a soft white with a runny yolk to seep into and flavor each bite of the chili. It’s simply a different eating experience.

On the other hand, this “poacher” does some things a simple pan of water cannot do. Here is a recipe from the instruction manual — printed in four languages — that comes with the poacher.

POACHED EGG WITH MILK OR CREAM
Fill the egg poacher pan one-third full of water.
Mix four eggs with some milk or cream. Season with pepper and salt. Pour the mixture into the cups.
Set the saucepan on the stove and bring the water to a boil. Put the cups in the tray and place the whole into the pan. Cover with the glass lid and leave to steam for about 4 minutes. The eggs might rise a bit during the steaming, but  do not worry, they will collapse as soon as you take the eggs out.
Take out the cups from the tray and turn them upside down on to a plate. Serve with toasted bread triangles.
VARIATIONS
Add chopped chives to the egg mixture.
Add small pieces of bacon or ham to the egg mixture.

I chose to chop a mushroom, saute it in butter and add those pieces to the cups. Pour the egg mixture over that and pop it into the “poacher.” 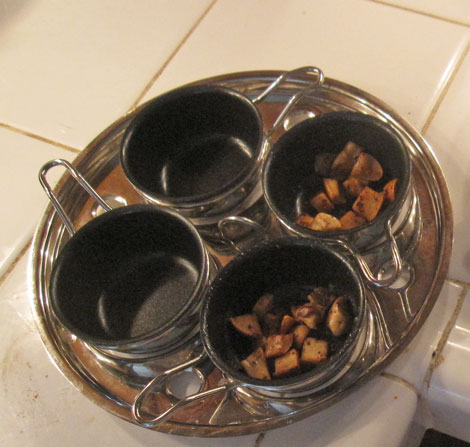 add egg mixture to the cups

The eggs jiggled when I turned them out of the cups. I was surprised to find the outer layer soft like a scrambled egg and the center runny, as a poached egg would be. Now that’s a good egg. Yum.

There are other variations, which I have yet to try, so look back occasionally to see what’s up.

One thought on “Another new toy”