I hold a pack of bacon in my hand, but don’t feel like going through the rigor of frying it. “Carol, isn’t there a way to cook bacon in the oven?” She was at the breakfast table reading from the SF Chronicle on her iPad.

She made a few taps. “This guy on his blog says to line a pan with foil, put on the bacon and put it in a COLD oven. Bake at 400°F for 17 minutes, but WATCH. Bacon thickness, your oven behavior and so on and can vary the timing.”

I put the bacon in our Countertop Convection Oven, set it for 400, turned it on and set my timer for 8 minutes. It took 5 minutes for the oven to tell me its at 400. The bacon started to sizzle at that point. I took a peek and it was all wrinkley and sizzling. By the time my timer dinged, it looked nice and soft done, but not crispy. I turned off the oven and put the bacon on paper towels on a plate. Put those back in the warm oven, poured the bacon fat in my frying pan to cook four slices of apple and two slices of baked potato.

Apple and potato cook. (That’s a really swell OrGREENiC non-stick skillet we got at Bed Bath Beyond.) 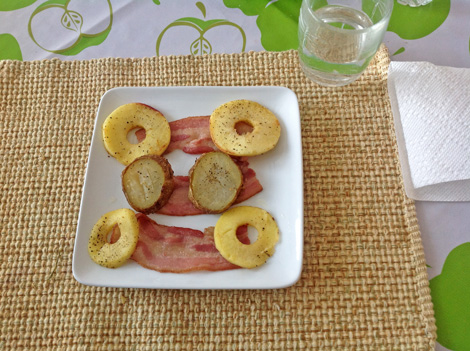 This is not news… just the first time for me.