…or is it a Stew of Root

I’m so full of stories — there’s plenty of Texas left and some Reno to come — but they’re not strictly about food and I thought I’d better squeeze one in about food. It’s not for lack of cooking or eating — we’ve been doing that — it’s just that there’s all that other stuff, unfinished.

Whatever… I took my own advice and revisited the Bi-Rite Cookbook.

Standing in Books, Inc, I was browsing that cookbook and came across Wine-Braised Chicken Legs with Root Vegetables. I gave it close inspection and decided that I must make that recipe. And so I did. Along the way, I modified and adapted a lot, but stuck to the idea of braising chicken legs and root vegetables in wine and chicken broth.

3 whole chicken legs and about 2 1/2 pounds of vegetables, not peeled or trimmed. (I used turnip, rutabaga, potato, fennel, carrots). The onions are cooked separately and don’t count with the vegetables.

Before we got to that point, I put the whole chicken legs (about 2 1/2 pounds) on parchment paper on a large baking sheet seasoned them generously with salt and pepper. I put them in the refrigerator about 9am (recipe says uncovered overnight, but I figured 7 hours or so would be just fine to dry them and soak in the seasoning).

Dredge the chicken legs in about 1/3 cup flour, shaking off the excess. I took my biggest Le Creuset Dutch oven to brown the legs in plenty of olive oil over medium heat, they need to be in one layer, otherwise they’ll steam, not brown. If you don’t have a big enough pot, work in batches.

Start skin side down. Cook, turning occasionally, until deep, golden brown all over, about 15 minutes.

Set aside the chicken legs and remove all but 1 tablespoon of fat from the pot. Add 3 thick slices of bacon or pancetta cut in 1/4 inch strips, stirring and scraping the pan until the bacon is browned and crispy. 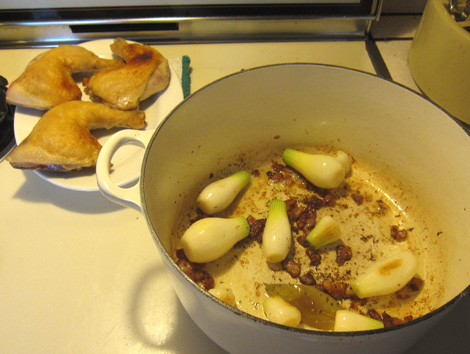 Add the spring onions. a bay leaf, salt and black pepper and cook, stirring, until the onions just start to brown on the edges, about 5 minutes. (The actual recipe calls for 1 large onion cut into 1 1/2-inch chunks).

Add 1 bottle of wine — I used a German Riesling — and cook stirring occasionally, until the wine has reduced by half and has thickened, about 5 minutes.

Add the 2 pounds of trimmed and peeled root vegetables and 3 large sprigs thyme and cook until the vegetables barely begin to soften, another 5 minutes. 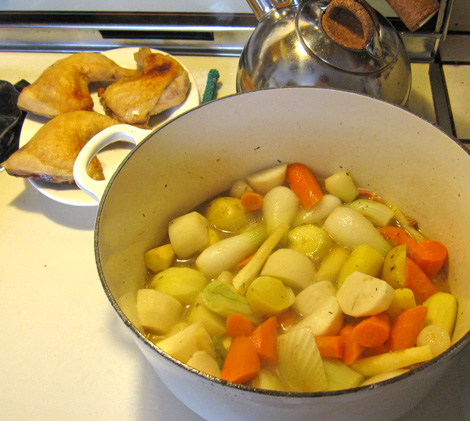 Add the chicken legs and about 3 cups chicken stock. (I used my homemade.) There should be enough liquid to just barely cover the chicken legs; add a little more liquid if necessary. Increase the heat to medium-high and bring the liquid to a bare simmer Cover the pot and transfer to the oven.

Bake until the chicken is cooked through and tender, about 1 1/4 hours. Taste the sauce and season.
Let it rest for 30 minutes while you make your salad, before serving.

Now that’s doggone good and a real meal. We served it with a simple spinach salad with raisins and walnuts.

The next morning, I had this leftover chicken and vegetables. So I cut some of the vegetables up and added some bits of Fatted Calf Picnic ham for a change of pace.

I was going to do one of my breakfast hash deals with an egg over, but then I got to thinking, this stuff is kinda wet, maybe a frittata would be more appropriate. So… with 2 eggs, and a way different cooking technique and sequence, I made a frittata for breakfast. Here it is, cooking.

And here it is, broiled and ready to eat. 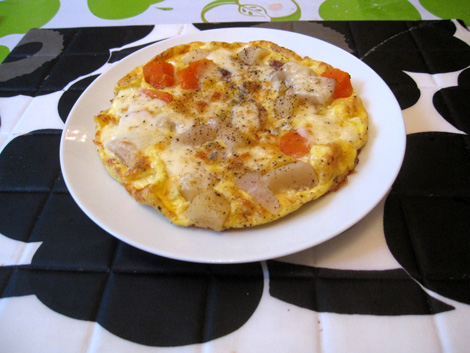 One thought on “The Root of a Stew”