The two-week hype leading to Super Bowl XLVI in Indianapolis was in full swing. About the fourth time somebody mentioned having the world famous shrimp cocktail at St. Elmo’s Steak House, I said to Carol, “Eric and I ate there on our cheese road trip in the summer of 2008. We had the shrimp cocktail and it was good, but I don’t remember it being SO SPECIAL.”

That same day I got an email from Eric on that very subject:

On Eats, in honor of the Super Bowl in Indy, you should reprise our meal at St. Elmo’s, or maybe try to replicate the cocktail sauce at St. Elmo’s as one of the tapas at your SB party, and write about that?

I suggested we stop in Indianapolis for the night, about two hours to the southeast [of Chicago]. Maybe we could get a tour of the new stadium for the Colts that will open this fall. Besides, I’ve never been there — except passing through on US-40 on the way to an OSU v. Illinois football game in 1960. Stephanie, the Hilton desk clerk, told us we would find plenty of places to eat on Illinois Street, the street just outside. Indeed, McCormick & Schmick’s was in the hotel and we passed at least four steak houses, including Weber Grill Restaurant and the ubiquitous Ruth’s Chris and Morton’s. St. Elmo’s Steak House was about three blocks down and looked local, maybe because of the plain, old time sign. Lots of cops were on the street — something about a Black Congress rally on the weekend — so I asked a cop about St. Elmo’s. “Great,” he said. “Be sure and have the Shrimp Cocktail.”

the cops and yours truly

Our waiter Billy, sporting muttonchops, was really nice and very thorough. But once he had started his spiel, there was no stopping him. That was okay with the “world famous shrimp cocktail we grind our own horseradish daily,” because we weren’t familiar with that and contemplated ordering it. But the, “Founded in 1902 as the country’s first Steak House. Although we are a steak house, for those of you who are not fans of red meat,” I said, “Billy, you can stop there, we love red meat.” But he continued, “,we have a terrific selection of seafood, flown in daily. Our vegetables are fresh, not frozen, from local Indiana farms.” Billy gave good spiel, and good service.

Since the servings were Midwestern huge, we split the Prime Rib (I cut and Eric chose) and an order of the world famous Shrimp Cocktail. The horseradish was indeed piled high and freshly ground. We were warned to take it easy on the first bite and I did, but piled it on the second bite — ooooweee! That’s a sinus cleanser! Loved it! The Prime Rib was everything a Prime Rib should be, moist and perfectly medium rare. Primo baby!
The sommelier recommended Mauritson Zinfandel, Dry Creek, Healdsburg, and it perfectly complemented the food.

Ah, yes… the memories of that trip flowed over me.

Later in the week, Eric sent a link to the recipe for the shrimp cocktail sauce:

This web site purports to have the “original” and a gourmet version of the St. Elmo’s cocktail sauce. The original seems to be simply fresh grated horseradish steeped in cider vinegar added to Heinz ketchup. I believe it. The gussied up version has the steeped horseradish plus lemon and lime juice and uses “Bennett’s Chili Sauce(?)” instead of Heinz.

I will be making the original version (the Belfast Coop has fresh horseradish root, don’t you known???) for a shrimp cocktail to bring to our SB party as a “taste” of Indy.

I had planned on doing two kinds of chicken wings, using recipes from Tyler Florence and Aalton Brown of the Food Network. I even bought 8 wings and tested them at dinner the night before. They were both good and pretty easy, but having them hot and ready for halftime would take some planning.

But hey… That shrimp cocktail provides a tie with the Super Bowl host city, AND it would be way easier — make everything ahead and chill it.

Eric —
Thanks for letting me in on this. I had planned on two types of chicken wings — even tested the recipes Wednesday night — but now I’m inspired to do St. Elmo’s Shrimp Cocktail instead.
I guess for 10 folks, I’ll just put 40 shrimp in a metal bowl over a bowl of ice and dump the sauce in the center for folks to take as much as they want/need.
dad

You might want to offer a MILD flavor to go with “St. Elmos Style”. That’s what I’m doing because the folks at the party won’t all appreciate the strong stuff…

Made original version for Super Bowl XLVI, 2012
10 folks –
5T horseradish
1 1/4C cider vineger
5C Heinz Ketchup
Made what I called “full strength” and “somewhat milder
Full Strength 3T drained horseradish, 2C Heinz ketchup.
Somewhat milder: 2T drained horseradish to 3C Heinz ketchup
I didn’t think the “full strength” was very hot. C tasted and agreed. So I dumped a few shakes of hot sauce in. Better.
That’s a helluvalotta sauce, even for 2 pounds of shrimp (about 48). Anyway, people loved the shrimp (I must say, they were perfectly cooked  — in Eric’s beer boil). Monday, I had the 5 leftover shrimp for lunch with the full strength sauce. The sauce, after sitting for a day, was hotter… I would say just right.
NOTE: I got fresh horseradish at Whole Food. Didn’t know how much to get, so I got two pieces. Used about 1/4 of one piece to make way more than 5 tablespoons.

By the time I was ready to take party food pictures,
a) I was really tired and hungry from work and anxiety;
b) C pushed some button to disable the TV just before the game was to start.
With people hovering, I finally managed to get the game on, but was so distracted I took no pictures. May I use your St. Elmo sauce images for eats, should I actually write something?
dad

Dad–
Hmm, I read the recipe as 2T Horseradish in 1/2(!) Cup ketchup. Much LESS sauce, and it was hot, but not as hot as I remembered it, so I added an extra 1 Tbsp of H: perfect. Plus the color better matched the light red in the picture of the real thing you posted on Eats. I served it with a pound of 26-30 cnt Jumbo shrimp, but could have brought 2 lbs. I thought most folks would have avoided the hot stuff, but most tried it and no one complained. One guy said, “YEAH! That’s just like I make it.”
One additional bit for mine: I thought lemon should be included in the St. Elmos mix, so I zested 1 lemon and added that to the fresh grated H while it steeped in cider vinegar overnight. Then I added 1 teaspoon lemon juice to the final mix. I think that made it POP. I will definitely make it again.
Please use my foto if that’s helpful.
–ER 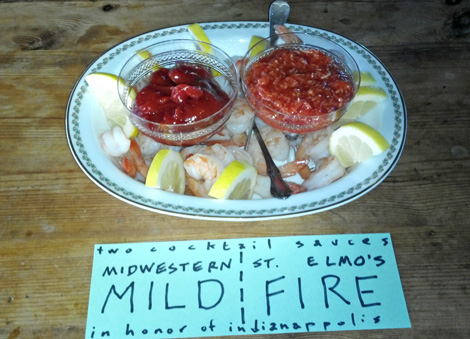 Well, here’s Eric’s picture. I must say his proportion of 2T to 1/2C sounds like horseradish sauce…

2T to 2C sounds like ketchup with horseradish. Can’t wait to try it again… I’ve got enough horseradish!

And here we are doing prep, before being rudely interrupted by the game.

shrimp thaws, eggs about to be boiled 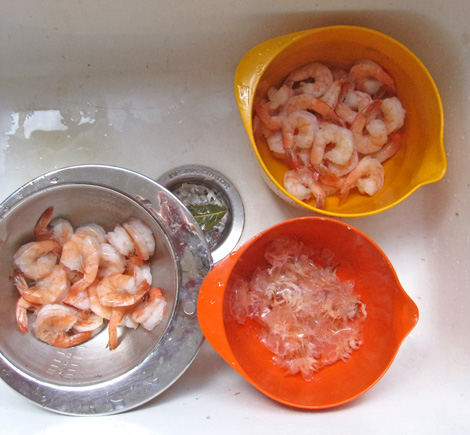 games of skill and chance