What Would eats Do?

I have an old standby recipe and I never tire of it; Artichoke and Potato Ragout from the Union Square Café Cookbook by Danny Meyer and Michael Romano 1994 — but c’mon, this cook needed a change o’ pace. [Now that I’m writing this, I looked for Artichoke and Potato Ragout in eats, to link to it. It isn’t there. I’d better write about it since it’s one of my favorites. Next time I have artichokes.]

My artichokes had been laying around for over a week and, time to get at ‘em. I was bereft of inspiration, so I went to the Food 52 website to look for artichoke recipes.

A lot of their preparations were deep fried and I don’t do that. Many others featured “healthy grains,” not much into those. I found four I thought I might make: Pan Fried Artichokes in Lemon Garlic Brown Butter, Creamy Artichoke Soup, Baby Artichokes & Farfalle, Braised Artichokes. Didn’t want to make any of those for tonight, but though the the Braised Artichokes was a pretty terrible recipe [cook whole artichokes in seasoned canned crushed tomatoes and water for 3 to 4 hours] it reminded me of a chicken fricassee dish from the Frugal Gourmet. That used baby artichokes braised in tomato sauce with black olives and chicken. I didn’t have any chicken, but I got out some mild pork sausages from Burgers’ Smokehouse.

OK… artichokes, braised in tomato sauce with sausages and, say, served over spaghetti. Where did spaghetti come from? I cooked a-third-of-a-pound for lunch and had enough-for-two left over. I made a list of what I might do and hung it on the cupboard door: 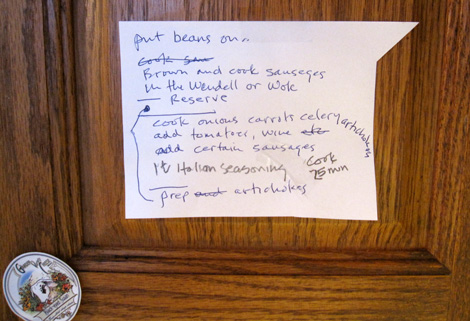 I forgot to say, I’m cooking a pot of Italian Butter Beans at the same time, but that’s not related to this dinner — some future dinner.

PUT BEANS ON…
I had been soaking the beans for a while, so they were ready for the pot. My good friends at Rancho Gordo say that I don’t have to soak their beans, because they’re not old. These beans are from Iacopi Farm, but I know that they, too, are not old. No matter… I’ve always soaked my beans and it’s no bother. I pour water over them just after breakfast in the morning and by the time I’m ready to cook, they’ve soaked. Doesn’t hurt… can help. 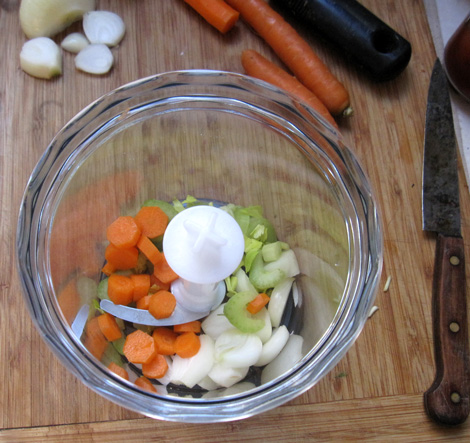 I chopped onions, celery and carrots and put them in the pot with olive oil to cook and soften. That takes about 5 minutes. Meanwhile, I chopped more of those vegetables for my braising sauce and set them aside. [That’s my swell new Breville chopper deal.] 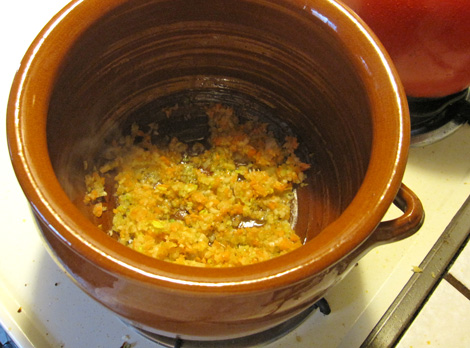 Put the beans on and got them going. They’ll take about an hour on the back burner, time enough to get the dinner made.

BROWN AND COOK SAUSAGES
These are little Burgers’ Smokehouse medium spiced Pork Sausage Links. [Yes, I’m a buy local guy, but nobody I know of around here does smoked pork as good as Burgers’. Besides, they’re made in California, Missouri.] Actually, they’re not cooking in the Wendell {non-stick] wok, but the Joyce Chen cast iron wok.

PREP ARTICHOKES
While the sausages browned, I started prepping the artichokes. 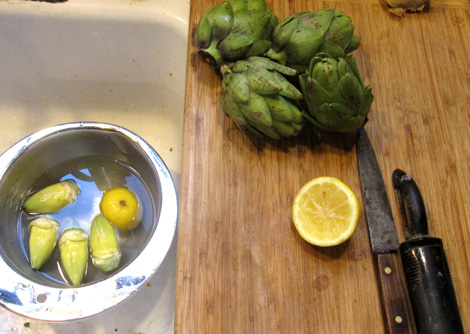 When I’m ready to put them in the sauce, I’ll cut off the pointy ends and quarter them, but for now, by leaving them whole in acidulated water, they’ll keep their color.

It started with the sausages, which flavored the olive oil and are now reserved. I added onions, celery, carrots, garlic and got those cooking, then threw in the quartered artichokes and stirred and cooked until they started to tender. 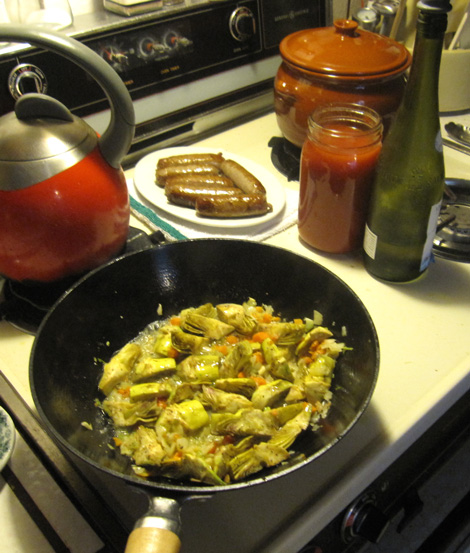 As you can see, we have the sausages waiting patiently on a plate, a quart of my Nov 2010 unseasoned San Marzano tomato sauce and some white wine. On the back burner is the beans, cooking away on really really low heat.

I’m going to proceed with Marcella Hazan’s method of making “sugo;” to the vegetables add a gurgle of wine and cook until nearly all of it evaporates. Add tomato sauce and nestle in the sausages. 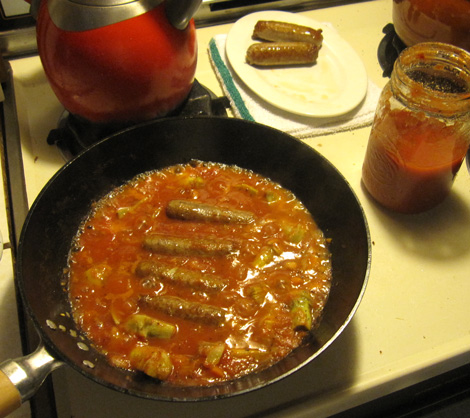 Season with salt and pepper and a teaspoon of “Italian Seasoning” and cook very slowly for a good long time to let the flavors marry. I cooked it for about half an hour, then let it sit for an hour or more until dinnertime when I warmed the sauce, steamed the already cooked spaghetti, made a little plate of olives, pickled beets, French radishes and a hard boiled egg. I opened a bottle of 2010 Domaine de Durban Beaumes de Venise Rouge and called that dinner. 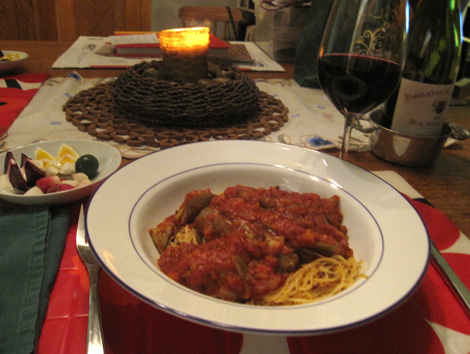 That’s one fine dinner. I’ll have to write it down.