The black cod of FISH CLUB fame was fabulous, as noted. The extra bag of fish, sous vide, we put on a plate and into the refrigerator, where it patiently waited until Friday. No hurry, no worry… the fish is cooked and in its juices, it can only get better. 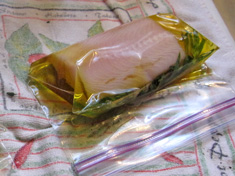 I had this idea of using it in a fish soup, where I could make a soup base and just lay the cooked fillets on top to warm.

A few years ago, I found a recipe in the NYT for Fish Soup With Fennel and Pernod. It is written in two steps:

make a broth,
add the fish.

Just what would seem to work for this occasion. The reason it was written in two steps had to do with noisy cooking before the writers put their baby to bed and quiet warming after. (What newspapers and mags won’t do to concoct a fresh and plausible story.)

In any case, this recipe will work for me.

Carol has been on my neck to use the three ears of corn in the refrigerator hidden on the very shallow shelf over the vegetable crisper; out of sight, out of mind. Now what to do with corn to go with a fish soup?

I found a recipe for “Skillet Corn” from 2005 NYT Magazine story about David Halberstam in my TO COOK folder.

Put an oiled cast iron skillet in the oven at 425° for 30 minutes. Cut and scrape kernels from 8 ears of corn. Add 2T cream and 1/4 cup flour, mix and dump in the skillet. Bake for 40 minutes.

Sounds preposterous. No wonder I haven’t used it in over six years. No time to experiment now. But I do like the idea of scraping all the corn goodness off the ear.

“Real Creamed Corn,” — a playing with corn essay by Edward Schneider and appearing on Mark Bittman’s NYT blog — sounded doable and fun. I especially liked the part about “it made… a mess (yay!) and yielded a nice wet mass.” So there’s nothing to do but get started.

FISH
A two-step deal, as noted above… and the first step has a few steps of its own —

On the right, onion, celery, garlic and fennel pulsed gently in my little Braun Multimix, until chopped into a coarse paste.
On the left, the recipe called for:

What the hell… I happen to have a flat of actual San Marzanos for my upcoming Tomato Saturday. I peeled and chopped four of those fresh babies. For the puree, I threw four more in the aforementioned Braun Multimix and whipped their ass into shape. This dish looks good already.

So… cook the vegetables until soft, add Pernod and cook off, add seasoning and wine and cook down, add tomatoes and cook a bit and take off the heat. That’s it for step 1.

So now I’ll do the CORN.

As noted above, this isn’t taken from a recipe, but from an essay about creamed corn, so I’ll be winging it, much as the writer was, from the sound of it. The basic idea is to create a nice wet mass of corn, add some cream and cook it until it tastes cooked. Oh yes, add some flavorings and herbs.

I peeled my three ears of corn with a vegetable peeler… I don’t want kernels, I want cornness.

that's my vegetable peeler tucked in the back there

When I started cooking, I started with bacon… wouldn’t you? One slice chopped, cooked and removed to a paper towel to drain. I poured off a little of the bacon fat, but left enough to start cooking chopped scallions (I would have preferred shallots, but didn’t have any). When those were ready, I added my corn and stirred until it started bubbling. It was pretty dry, so I added cream, a quarter cup or more until it seemed right. The good author Edward Schneider used a lot of tarragon, so I did the same (one of the few things planned in advance).

the corn is cooking... almost done

Mr. Schneider went on to say, “the corn took about ten minutes to taste cooked; I gave its consistency some help with the immersion blender,” so I followed that advice, using my
Braun Multimix attachment. I seasoned and tasted… Hoo Baby, that’s good! (Why am I surprised?… corn, bacon, cream… duh!) That will hold nicely until the soup is ready, and it won’t be long.

Stage 2. Return saucepan to medium heat until barely simmering. Gently slide mussels and fish into broth. Bring broth back to a simmer, and cook, stirring once or twice to give mussels room to open, until mussels and fish are cooked through, 6 to 8 minutes.

I got the mussels earlier in the day, so all I had to do was get them out and put them in the simmering soup.

Meanwhile, slide my wonderful black cod out of its bag, break it into nice pieces and slip it into the soup with a couple minutes remaining to cook.

I loved making that dinner because it involved a little creativity and messyness; and, by gosh, it tasted great. Served with 2010 Cline Mourvedre Rose. Yum.

Here’s the “bones” of that meal:

1. Stage 1. Put onion, celery, garlic and fennel in a food processor, and pulse gently until chopped into a coarse paste.

2. Heat olive oil in a large saucepan over medium-high heat. Add coarsely processed vegetables to pan, and sauté, stirring often, until softened, about 6 minutes. [too me 8 minutes or more] Add 2 tablespoons Pernod, and boil until almost evaporated. Add red pepper flakes, and season with salt and pepper.

3. Pour in wine, and bring to a boil. Reduce for 2 minutes, and add tomato purée and chopped tomatoes. Bring to boil, stir, cover and remove from heat.

4. Stage 2. Return saucepan to medium heat until barely simmering. Gently slide mussels and fish into broth. Bring broth back to a simmer, and cook, stirring once or twice to give mussels room to open, until mussels and fish are cooked through, 6 to 8 minutes.

5. Divide mussels and fish into warmed bowls. Pour soup over all, and scatter with fennel tops. Sprinkle with remaining teaspoon Pernod and more olive oil. Serve immediately with crusty bread, if desired.

I’m a great fan of polenta, but during the summer I ask myself why bother with that when you can have creamed corn instead.
A great deal of creamed corn is eaten in the United States — anywhere else, readers? — most of, I’m certain, canned. I’m not sure by what process canned creamed corn is manufactured, but I can tell you that it isn’t exactly heavy on the cream (the ingredients in one major brand are: corn, water, modified food starch, sugar and salt). That said, I have childhood memories of it, and I think they’re fond memories, though I wouldn’t swear to that. My template for creamed corn, then, is the creamless version you need a can opener to eat.
This changed ten or fifteen years ago, when a friend of Minnesotan origin explained what creamed corn was really about and gave us a corn scraper with which to make it. This has teeth on one side and a contoured cob-hugging hoe-like scraper on the other. You slit/rupture the kernels with the teeth, then flip the gizmo over and scrape out all their sweet, starchy content, leaving behind much of the capsule (the part that gets under Junior’s braces and Gramps’s dentures). You cook this mush, most commonly with butter, onions, butter, milk or cream and butter. Maybe a little bacon too. Dances the pants off polenta.
But from polenta we can learn something about creamed corn: it doesn’t have to be a side dish. You can use it as the foundation (structurally speaking) of a dish and simultaneously as its sauce. We often eat dishes in which the “sauce” is a vegetable dish that normally stands alone — at this time of year one thinks of variations on pepper stews or ratatouille.
On a recent market day, there was striped bass and corn and tomatoes and peppers and tarragon. When my wife, Jackie, phoned me about what she’d found, it was the latter, with its sweet and pervasive aroma, that crystallized my thoughts about dinner. We’d have fish and tomatoes on creamed corn. With tarragon (sage, though utterly different, would have been another good choice for this dish).
But I couldn’t find the corn scraper, which isn’t surprising as I can rarely find anything that I haven’t used in the previous 36 hours. So, former Boy Scout that I am (I lasted about ten days), I tried a new approach that worked differently but quite well: rather than just slicing the kernels off the three cobs and pureeing them as I had done in the past, I took one of those Y-shaped vegetable peelers and shaved the kernels off millimeter by millimeter. This didn’t leave behind as much of the capsule as the classic method, but it made as much of a mess (yay!) and yielded a nice wet mass. This went into a saucepan with maybe a quarter cup of cream and plenty of tarragon, salt and pepper. In a separate skillet, I sweated a minced shallot in butter, then added a diced frying pepper — the pale green kind with thin flesh.
The corn took about ten minutes to taste cooked; I gave its consistency some help with the immersion blender, then added the shallot-pepper mixture, a little more tarragon and some fresh butter.
I browned the seasoned fish on the skin side for about three minutes over medium heat, then turned it over and covered the pan to let it “steam” over low heat — yes, the skin was no longer crisp, but it had the flavor of having been seared: a sad debasement of a technique I heard about from Gregory Brainin, who works with Jean-Georges Vongerichten. When the fish was a minute from being done, I added six or seven very ripe yellow tomatoes about the size of a large plum, cut into eighths.
The rest is plating: Creamed corn; semi-cooked tomatoes around its perimeter; fish in (or near) center; juices from the fish-tomato pan on top of the fish. More tarragon.
Now, the creamed corn with butter, peppers and tarragon would have been dreamy by itself, and that kind of deliciousness is often a signal to stop right there. But the tomatoes added a new element with their contrasting texture and their mild acidity, and, even though cooked separately, the fish was such a good match that it gave the impression of having spent its life in a corn field (which, if had been farmed, it might as well have, but this was wild fish caught nearby).
A terrific dish — make it while there’s still decent corn around and before you have to resort to polenta again.