Sent from my iPad
hello Marc. My typing skills are not very good.  I have room for Lots of improvement.  What are you having for supper.  We are having Keystone Pasta.  You put lots of basil in the bottom of a 9×13 pan.  Peal about 8 large tomatoes. Sprinkle o.o. Over salt, pepper bit of sugar.  Bake 350for@30minutes and serve Over pasta.  This is a Hale original.  I make this when I have lots of basil.  Just wanted to
Let you know we are enjoying the iPad.  I think it was a good choice.  Say hi to Carol.
Jan

On our way to the Hale Hollow Pigroast, we stopped for an overnight at Carol’s brother Mark’s farm in Jackson, Ohio. Jackson is about as far southeast as Ohio goes — you want to get away? — this is away. 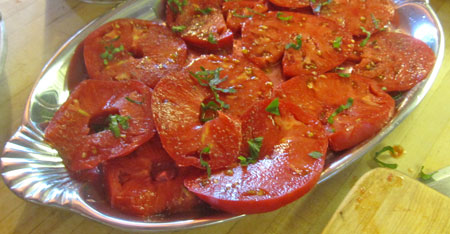 When we walked into the house, I remarked on a gorgeous plate of sliced Keystone tomatoes we would be having for dinner. Mark and Jannie are proud of their tomatoes and this is peak season, so tomatoes are a big part of mealtime. I don’t remember ever having Keystones, but Mark pointed out they’re a close cousin to brandywine tomatoes.

Mark took me on a ride around his place on his Mule, a four wheel get-around-easy-to-keep-up-the-place toy. Fun. 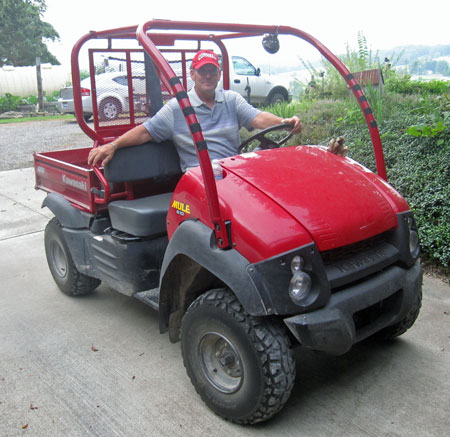 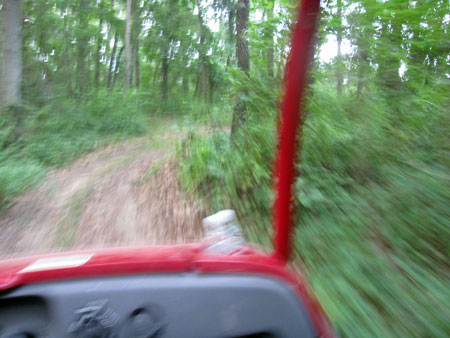 We went rippin’ through the woods and crusin’ th’ dale. 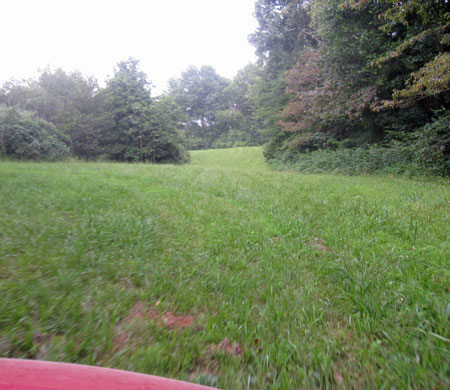 Passing the garden he showed me the Keystone tomato plants, standing taller than me.

Welcome to Ohio. The temperature and humidity were hovering around 90, so dinner was prepared on their new Big Green Egg barbecue and smoker they got at the Four Mile Bakery and General Store for cooking on days like this. Note the thermometer on the tree in the background. 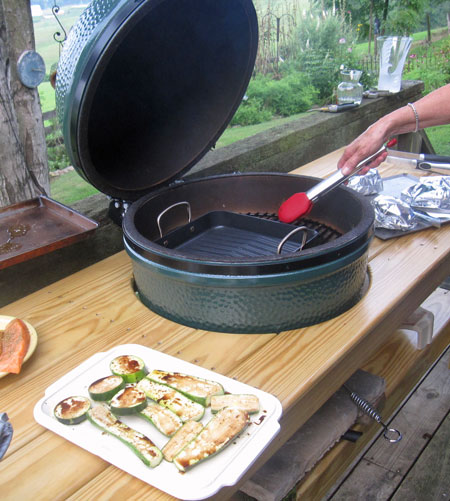 The Four Mile store is owned and operated by Mennonites and most everything in the store is made by them. Jackson may not be computer friendly, but it sure is food and craft friendly. 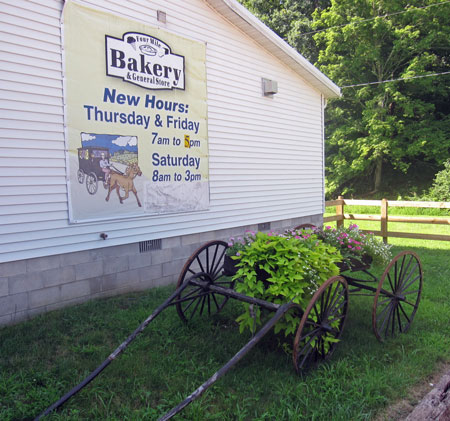 Hungry for a pickle?

Have a need for a doily?

Be great to have a store like this on Polk Street. People from San Francisco can marvel at the wonders of Jackson County, Ohio and folks from Jackson can delight in a visit to SF, but neither would change places. The Four Mile Bakery is happy where it is.

Meanwhile, Carol showed off her new iPad, playing her solitaire game. Mark flipped out. He said that they’d like to get a computer, so they could keep in touch with family and friends – even read my blogs – but cable hasn’t reached their neck of the woods and dial-up just doesn’t work. They have a dish for TV.

Bristling with knowledge from my research in buying the iPad for Carol’s anniversary gift, I said, “I’ll bet an iPad G3 would work out here. Your cell phones work here, and the iPad uses the same technology. All you want to do with a computer is email, do internet stuff and play solitaire. A perfect fit.”

That’s where it all began. Mark and Jannie went to the Apple Store in Columbus and got their iPad before we got back to San Francisco. Next thing we knew, I got the Keystone Pasta recipe by email. Nothing to do but make it, since my Mariquita box that week included a variety of heirloom tomatoes — though none as big and meaty as Jannie’s Keystones.

I had 5 heirloom tomatoes (2 Cherokee purple, 3 green zebra) and lots of San Marzanos to fill in the spaces. A full bunch of basil came in that box, as well.

I decided to make fresh pasta to go with the fresh tomatoes and basil. Fresh on fresh. 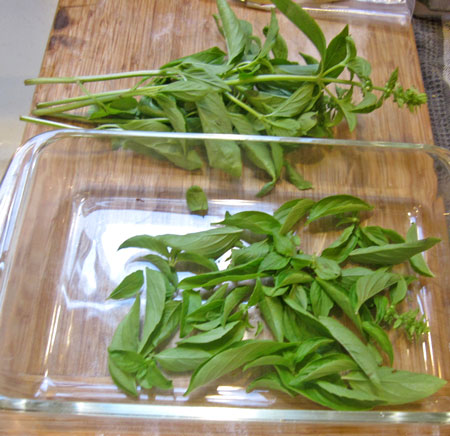 basil to the baking dish

Jannie didn’t say whether to chop the basil… I left the leaves whole.

A farm recipe doesn’t say whether to slice or chop the tomatoes, or leave them whole. Jamie Oliver did a similar recipe using whole tomatoes. I decided to slice thick.

salted, peppered, oiled and ready for the oven

For an EZ one dish meal, I decided to slip in some sausages with about 20 minutes to go on the timer.