That’s often all the recipe says about the peppers. Everyone has their own roasting method and I’ve tried them all. Recently, the Mariquita Mystery Box was chock full of colored peppers, and not only that, Carol wanted an extra bag of Red Piquillo Roasting Peppers to make her famous pimento cheese spread.

a mother lode of peppers

Roasting peppers takes time. My go-to method is to hold a pepper over a gas flame until blackened, put it in a paper bag to ‘steam’ and then scrape off the skin with the back of a knife. Easy, effective, messy, takes time. Since I had 15 assorted peppers (Hungarian Spicy Peppers and other red and yellow) plus an equal number of the Piquillo to deal with, I thought I’d check out another method, so I went on line to Cook’s Illustrated and searched for roasted peppers. Here’s what CI had to say:

‘After flaming, broiling, and baking dozens of bell peppers of every color, both whole and sliced, we find that slicing and oven-broiling the peppers yields superior results.’

5. Arrange the strips of peppers on a baking sheet, skin-side up. Flatten the strips with the palm of your hand.
6. Adjust oven rack to its top position. If the rack is more than 3 1/2 inches from the heating element, set a jelly-roll pan, bottom up, on the rack under the baking sheet.

7. Roast until the skin of the peppers is charred and puffed up like a balloon but the flesh is still firm. You may steam the peppers at this point or not, as you wish. Start peeling where the skin has charred and bubbled the most. The skin will come off in large strips. 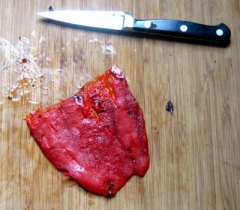 The peppers turned out leathery and really really hard to peel, and why not, cut open, spending time in the broiler dries them out. I don’t know what equipment CI used, but I used a countertop convection oven, which is relatively new, reliable and holds its temperature very well.

C’mon CI: You’re usually reliable, but sometimes you over analyze.

Another way to roast peppers for peeling is to broil, or grill them, whole. By grilling them whole, all the lovely juices stay inside. 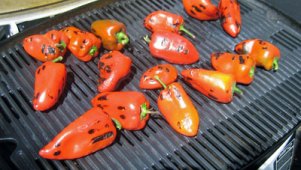 Put them in a bag to ‘steam’ and go on with the scraping. This works fine and the peppers retain their moisture. The trouble is they spend a good deal of time in the broiler or on the grill, and that ‘cooks’ them.

After laboring with the other other methods, I went back to searing the peppers over a gas flame. Yes, this is a one-at-a-time process, but the searing takes only about a minute and you throw the pepper in a bag to steam while searing the next one, working in batches of five or six. By the time you’ve seared your sixth, the first is ready to scrape.

it takes about a minute to get to this point

then throw the pepper into a paper bag to steam

When you cut open the pepper to remove the seeds and ribs, do not rinse with water… that will rinse away all the lovely juices. Scrape off the skin with the back of a paring knife.

these are ready to use; or freeze for later use 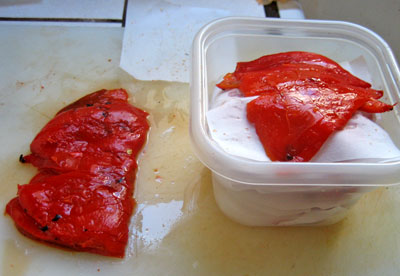