Join CUESA for a tour of two urban farms: Happy Quail Farms in East Palo Alto and Alemany Farm in San Francisco. Farmer David Winsberg will take us on a tour of his greenhouse and shade houses that are home to hundreds of varieties of peppers. He’ll also walk us through his vegetable patch, introduce us to his flock of chickens, and treat us to a tasting of Happy Quail peppers.Next we’ll head to Alemany Farm, the largest farm in San Francisco. Manager Jason Mark will show us around this unique farm that provides fresh, organic food and creates jobs for residents of a nearby public housing development.

As a person who loves living in the city, and also loves fresh local produce, I had to sign up.Happy Quail Farms 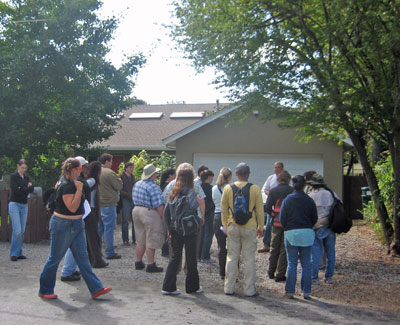 We got off the bus onto a suburban street of 1950’s tract houses. David Winsberg — facing the group — noted that he grew up on a 300-acre vegetable farm in Florida and when he moved to the Bay Area in 1984, he harvested quail eggs and sold them to sushi restaurants in the area, hence the name. This area of East Palo Alto was planned to be self sustaining, the residents, primarily Japanese, living on the street and farming the “back yard” of the one-acre lot. Now, the individual farms are a thing of the past, and David and his wife Karen farm their back lot and lease or “use” others to make up their two-acre farm.

We entered the narrow passage between houses, not quite knowing what to expect. 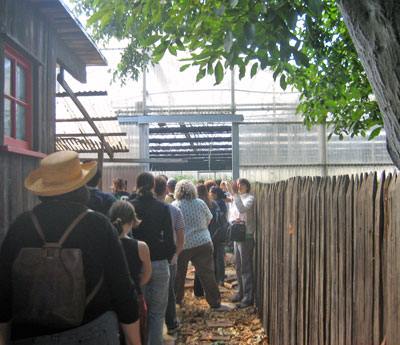 We found a huge greenhouse — nearly one-acre — where they grow primarily peppers and cucumbers, getting an early start on the season. 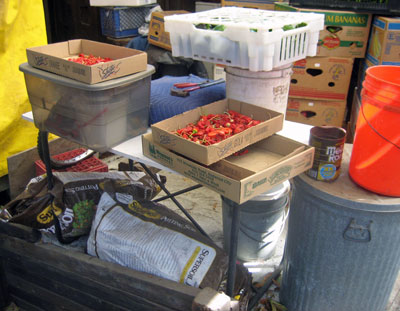 Just outside the greenhouse entrance, peppers are dried and ground to make paprika.

Did I ever mention the neat sound system CUESA provides? David has a wireless mike and a person in the middle of the tour group carries a speaker. Perfect 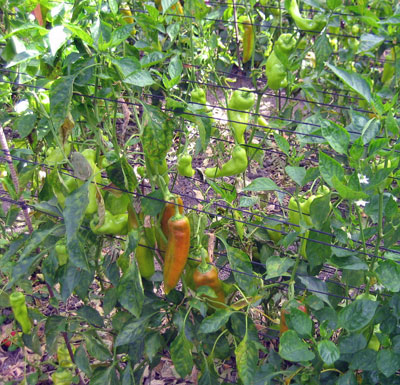 Peppers on the vine. 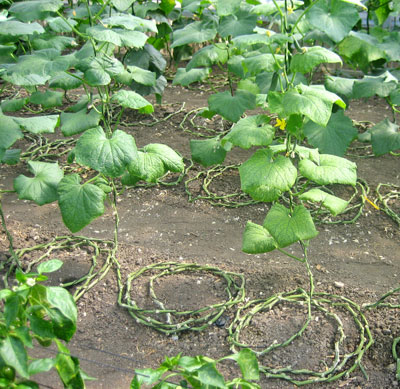 Cucumbers climb a wire from the ceiling. As they grow and the cucumbers are harvested, the vine coils on the floor.

Outside, we proceed to the next yard,

where we find another acre of field growing more peppers, squash, rhubarb, miyoga (ginger blossoms), persimmons and horseradish. The pepper plants here are shielded from the sun and wind with netting.

David introduced the Pimientos de Padron Spanish pepper to California and they have become extremely popular. Those and their 30 varieties of peppers are sold to restaurants, at Farmers Markets and shipped by mail order to most of the country.

Chickens are found in spare corners of the farm — a flock numbering 80 altogether. They are fed peppers (surprise), making for startling yolk colors in the eggs.

While farming is a serious business there is room for whimsy. 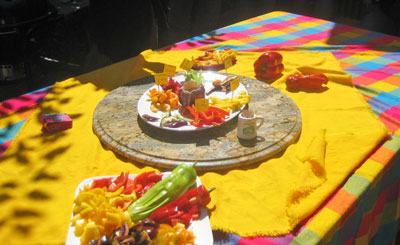 What’s a trip to a farm without a little snack of the produce? 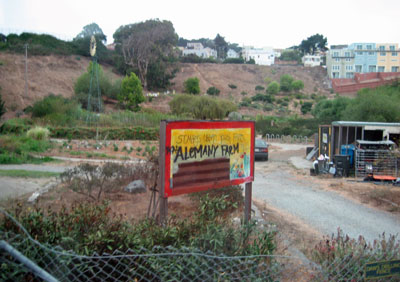 Alemany Farm is situated on a hillside, hard by I-280 and Alemany Boulevard. From the highway the land slopes up to Bernal Heights and Alemany Community, a 165-unit public housing development. The farm and housing are a project of the non-profit Alemany Resident Management Corporation whose mission is to address the root causes of violence by providing youth with meaningful work. The full history and purpose can be seen on the Alemany Farm website.

“Alemany Farm empowers San Francisco residents to grow their own food, and through that process encourages people to become more engaged with their communities. We grow organic food and green jobs for low-income communities, while sowing the seeds for economic and environmental justice.”

Alemany farm is not a miracle, though it seems so; it is the result of hard work and community spirit in taking an unbuildable and once useless piece of land and creating a living, working farm. Through a grant, youth workers are paid $50 a week for a six-hour shift, plus fruits and vegetables harvested from the gardens; volunteers do all other work.

Entrance to the farm 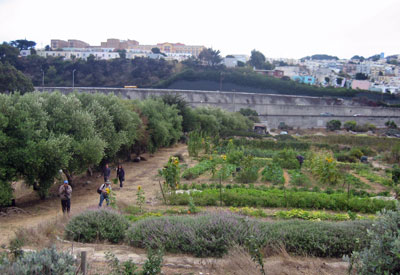 Just off the freeway.

Our tour was led by Jason Mark, manager of Alemany Farm who, along with three adult mentors from the community, comprise its only salaried workers.

Jason explained that one of the principles of organic farming is”not growing food, but growing soil to grow food.” He went on to say, “The World depends upon 6 inches of topsoil and the fact that it rains.”

Bees are kept on the hill, benefiting the farm and the beekeepers.The diverse topography and soil conditions demand a variety of farming techniques, from terracing on the hill to beds to,

planting in boxes where the soil is unsuitable. 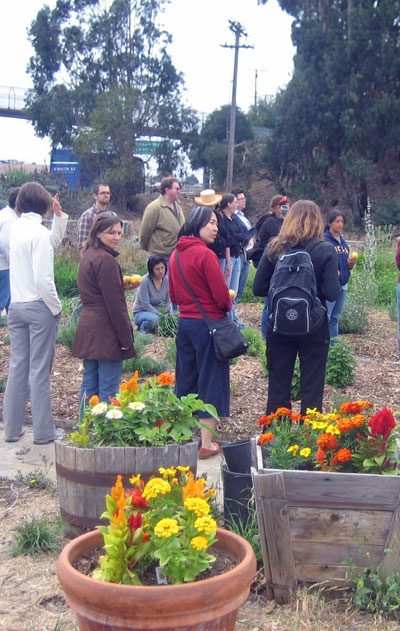 Flowers and herbs are grown, as well.

The windmill provides power for the drip irrigation pumps.

Alemany farm is a demonstration site; teaching biodiversity and reciprocity. Like your vegetable garden — expanded — it features many varieties of crops — 6 kinds of squash, 4 kinds of beans, etc — as well as fruit trees, berry bushes, flowers, herbs and bees.The produce of the farm is given in exchange for volunteer work and sold at farmers markets for a token, affordable price.

This was one of the best of the four farm tours I’ve attended in terms of learning how small bits of land in an urban setting can produce great benefit. In the case of Happy Quail, a profitable business, and at Alemany, a learning experience. A survey in the city of San Francisco identified hundreds of acres of vacant, unused land, which could be put to agricultural use. The Slow Food Nation Victory Garden at City Hall demonstrates how much can be grown in a small urban area. Perhaps one day, a locavore will look for food produced within a radius of a few blocks, rather than a hundred miles.

One thought on “Urban Farm Tour”