For Super Bowl XLI We hosted our XIth Annual Super Bowl Party and about ten people showed up, a nice size crowd for our flat. For this, we bought half of a Country Ham and served the ham on small rolls with horseradish mustard. There was lots of other football food, as well as betting and whooping and carrying on, though nobody was really a Colts or Bears fan.

I’m a big fan of meat loaf… why not Ham Loaf. Back at Columbus West High School, lo those many years ago, a couple buddies and I took an elective of Home Economics, Cooking. In the late 50’s this would be described as a girls course, guys took shop and metalwork. I took those too, and hated them. I signed up for Cooking because it seemed interesting, and, oh yes, to meet some girls. Cooking was way better than metalwork. I don’t remember all that we did in that class, but table setting and napkin folding stick in my brain, aside from the cooking. Chopping and baking led to the thing I remember best; our final project, Ham Loaf. I remember it was really good and it wasn’t something that my mother made, so it was new to me. Unlike meat loaf, it was tangy and sweet-and-sour.

I looked for a ham loaf recipe in our ancient Better Homes & Gardens Cookbook, but ham loaf was not to be found. The next best thing was to call Ohio. We called sister-in-law Margie at Hale Hollow and asked for her ham loaf recipe.

With little hesitation, she recited the following, over the phone:
Ham Loaf
From Margie at Hale Hollow

Mix together to combine & turn into a loaf pan.

Bake at 350 for approximately 2 hours. Baste with juices every 1/2 hour.

Did’ja ever notice how handed down recipes have few instructions? Unlike newspapers, magazines and books, they assume you know how to cook. 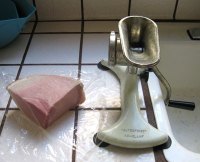 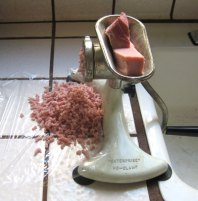 It’s meant to be baked in a loaf pan, but we like our meatloaf free-form in a baking dish, so we did it that way. Not a good idea. The glaze tends to run off and burn in the bottom of the dish. 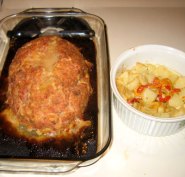 Served with a gratin of potatoes and artichokes.

For the next try, I baked it in our squarish Corningware casserole dish, mounded up from inside the edges with concave top to hold the glaze. That worked pretty well. 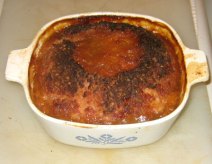 Since my old fashioned cookbook didn’t have ham loaf, I took the modern approach and nosed around the internet, getting quite a few responses to ham loaf.

Generally, other recipes have the same ingredients and methods, except most use equal parts of ham and ground pork. A CDKitchen recipe for Amish Ham Loaf calls the vinegar mixture “dressing” and boils it before using.

To my surprise, epicurious.com had a ham loaf recipe from Bon Appétit, February 1998. They add chopped onion and green bell pepper cooked in butter and cooled before adding to the meat mixture. This is a method that Paul Prudhomme employs in my favorite Cajun Meatloaf. Bon Appetit goes on to top their ham loaf with a marmalade-mustard glaze.
To top all, I stumbled onto the web site for Gahr’s Ham Loaf Company. I wouldn’t have guessed such a company existed.

“What is Hamloaf?” We are asked this question numerous times throughout the year by persons living outside the borders of Venango County, PA.

We describe our product as being similar to meatloaf but made from ground ham, ground pork, brown sugar and seasoning. Since 1976 our family has been making our hamloaf available to the public under state inspection. Recently, we made the jump to USDA federal inspection, so it could be sold wholesale and shipped nationwide.

Another tradition here in Pennsylvania is to use a sauce of vinegar, brown sugar, and mustard. Most of our customers tell us they enjoy our Hamloaf without a sauce. We have included a sauce recipe on our cooking page for those who prefer to use the topping sauce!

They don’t provide their hamloaf recipe, but they have a page of Cooking Suggestions:

At our home we prefer to shape Gahr’s Loaf Mix into ping pong size meat balls. We then cook it in a crock pot on high for two hours, we do not add any other ingredients or water. We then serve it with cheese flavored mashed potatoes or macaroni and cheese.

If you really want to make it special, you can add 1/2 teaspoon of vanilla per pound of hamloaf.

This recipe for topping sauce was submitted by Suzi Kraft-Roddy. Her sauce consists of:

Blend then baste every 15 minutes while baking. Leftovers can be used to make omelets or added to alfredo and noodles.

Other toppings include 3 parts Sour Cream to 1 part Horseradish. In the Fall our product can be cooked in Squash or Peppers.

We welcome your ideas for this cooking suggestion page.

Just guessing, but I think that pretty much exhausts the Ham Loaf topic.