The first time I remember having Salade Niçoise was in a café in Paris in 1979. I was alone, having lunch on a lovely August afternoon.

Of course August is the time when nearly all Parisians take holiday. My family and I were lucky enough to exchange houses for the month with a French architect, an acquaintance of a close friend. Our flat was a third floor walk-up (69 steps) so we were careful to plan our comings and goings. Situated on the Left Bank near Invalide, we were able to walk or take the Metro nearly everywhere. After breakfast, we could each go our own way (the kids were 11 and 13), sometimes for the whole day before assembling for dinner to exchange tales of our ventures.

The salad was served on an oval plate with a pile of tuna, surmounted by three anchovy fillets in the center. Green beans, tomato wedges, a quartered hard boiled egg, black olives and sliced potatoes were arranged around the tuna and dressed with a vinaigrette. Yellow potatoes! I had never seen yellow potatoes. I carefully took a bite of each ingredient — starting with a potato slice — and savored each bite. I hoped the experience would never end, but of course the plate was not infinite, and when I reached the last bite, perhaps an olive, I was wholly satisfied.

I did not find Salad Niçoise at home in Boston, but I had carefully recorded the ingredients and arrangement in my journal, so I was able to reproduce it at home. I couldn’t find yellow potatoes until years later.

Salad Niçoise is on restaurant menus now in the US, but often it is not a carefully arranged and portioned plate, but something tossed or piled, served in a bowl or even a hard taco shell. Beware! Ask your server to describe the salad in detail or steer clear.

Fast forward to my wife, Carol’s birthday. Good friends would be visiting San Francisco from Boston and wanted to have lunch with us.

Where shall we take them?
Let’s cook for them.
What shall we cook?
Salad Niçoise, it’s easy to do, makes a fabulous presentation, and is not something you get just anywhere.

I knew my memorized recipe from Paris, but I wanted to know more; Marge and Richard — and Carol’s birthday lunch — deserved the best. Luckily Carol was born in August, when tomatoes, beans and the rest are luscious and at their peak. My February birthday lunch will be far different.

I hit my books and the Internet to see what I could see.

When I Googled Salad Niçoise on the Internet, surprisingly the first two references were British and the third was a food blog. Interesting.

After going over the seven recipes and commentary, I arrived at “My Salade Nicoise,” and it was grand. The recipe below records the ingredients that I actually used and notes the source for future reference. 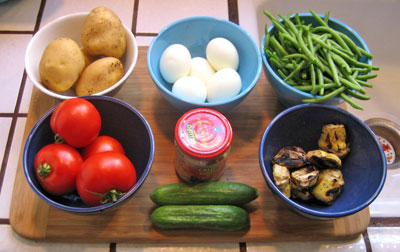 Whisk lemon juice, oil, shallot, thyme, basil, oregano, and mustard in medium bowl; season to taste with salt and pepper and set aside.

Bring a pot of water to boil. While that’s going on, make the vinaigrette.

Once the water boils, first, dunk the tomatoes for 10 seconds; remove from the water, peel and seed, cut in quarters. Reserve in a small bowl.

Second, cook the potatoes in the same water, whole, about 12 minutes. Remove to cool on a cooling rack, peel and slice. Toss with olive oil. Reserve in a small bowl. Meanwhile, prep the beans.

Third, cook the beans about 5 minutes until tender. [“Long French beans are what I expect in this salad. They are better when properly cooked (i.e., softly bending and dark green) rather than fashionably blanched.” London Observer/Guardian]

Remove to cool on a cooling rack. Reserve in a small bowl.

While the potatoes and beans are still a bit warm, toss each separately with the vinaigrette.

Artfully arrange tuna and vegetables on a platter.

Notes:
* From the Farmers Market this morning
#”Godzilla Fingerlings” are from Mariquita Farm
** From AG Ferrari delicatessen

Julia Child in Mastering the Art of French Cooking, Volume One

Salade Niçoise [Mediterranean Combination Salad]
Tuna, anchovies, tomatoes, potatoes, green beans, hard-boiled eggs, and lettuce are the usual elements for this appetizing combination, and you may arrange the salad in any manner you wish. Serve as an hors d’oeuvre or as a main-course summer salad.

Julia Child and Jacques Pepin in Julia and Jacques Cooking at Home
Two Near-Niçoise Salads
Here are two salads using similar ingredients but put together in quite different styles. Both are inspired by the Salade Niçoise, the appetizer platter of canned tuna, tomatoes, tiny black olives and other vegetables that is nearly as popular here in America now as it has always been on the Mediterranean coast.

Julia
The first is a large composed salad — a colorful arrangement of vegetables, hard-boiled egg halves, and various garnishes with canned tuna at the center. There are no rules for composing a salad — other than that it please the eye.

Jacques
Even in Nice, Salade Niçoise is put together in different ways and with different ingredients. Conventionally, it will always have canned tuna, tomatoes, and the small olives that are grown in the region. But in some places you will get green beans, potatoes, sliced onion or anchovy fillets as well. And while it is most typical for the ingredients to be set on the plate in separate bunches, to be eaten like an antipasto, sometimes they are all put in a bowl and tossed.

My salad with fresh tuna is in the modern style, the kind of thing that young chefs like to do today, combining warm and cool ingredients in a salad. Using vinaigrette as the sauté medium is a special touch, which makes the pan juices very flavorful — you definitely want to use these to dress the salad.

Salade Niçoise
This Provencal salad is one of the best of all luncheon dishes. You can vary it to taste, adding other vegetables of your choice. The only constants are the tuna, anchovies, hard-boiled eggs, tomatoes and tiny black olives. Optional ingredients: Thin sliced red onion, pimiento strips, green bell pepper. [Note: Beard uses lots of anchovies, 20 to 30 fillets for 4 to 6 servings.]Variations
Certain cooked vegetables may also be added to the salad, such as tiny, boiled new potatoes or sliced boiled potatoes, green beans or artichoke hearts.

Anthony Bourdain in his Les Halles Cookbook
His Salade Niçoise is simple and traditional, without commentary.

THE INTERNET
Here are some examples of Salade Niçoise from around the English-speaking world. I linked to the websites where you can get the recipes for yourself. Some of the commentary is included here, as it conveys the attitude of the writer.

The CommentaryThe anchovies
There are two very distinct types of anchovy fillets – those preserved in oil, and the red and meaty ones that are kept in coarse salt. The oil-preserved ones have a less interesting flavour but need nothing more than rinsing and patting dry before use.

The lettuce
Let’s be strict here – Salade Niçoise is no place for a designer lettuce. This is Cos or Little Gem territory. You need crunch. The Gem leaves are small enough to leave whole; the rabbit-eared Cos will need a bit of tearing. I sometimes cut the Little Gems into quarters rather than prizing the leaves apart.

The tomatoes
Ideally, use those rough and knobbly French Marmande, if not, really ripe plum tomatoes. They should be the juiciest you can find. Some people skin theirs, some don’t. I do, but much depends on the tomato itself and how thick its skin is. Take care not to ‘cook’ it when you drop it into boiling water to loosen its skin. Quartering the tomatoes rather than slicing them will save the salade from becoming ‘wet’.

The olives
No olives, no Salade Niçoise. I like the oval, matt, purple olives from Provence or, taking the ingredients out of their territory, southern Italy. Most times you get those fat, sticky fruit as black as molten tar. Very often they have been marinated with thyme and garlic. They’ll do. What is all wrong are green olives, stuffed olives and, worst of all, no olives at all.

The beans
Long French beans are what I expect in this salad. They are better when properly cooked (i.e., softly bending and dark green) rather than fashionably blanched.

The dressing
Garlic needs to figure somewhere in this, otherwise it ain’t Niçoise. Red wine vinegar, extra virgin olive oil, a tiny seasoning of salt – you already have olives and anchovies – and some black pepper, and, perhaps, just a dab of mustard are all you need.

The extras
Feelings run high about ‘extras’. Someone, somewhere will argue that at least one of these is essential and I am a heathen to suggest otherwise.

Artichoke hearts – the bottled sort, marinated in olive oil. I regard this as a high point in the proceedings. I suppose it is simply that I associate the mauve and sage-coloured spiky globes with the area. They turn up in the more expensive versions. [I used grilled baby artichokes.]

Boiled eggs. Escoffier didn’t and neither do I, but most of us regard them as de rigueur. The eggs should be only barely set.

Capers. They add bite and piquancy, making this the loud-flavoured salad it should be.

Basil and parsley are both interesting additions, but are by no means essential. Radishes, peppers, white haricots and, I think, new potatoes have taken a wrong turning on the way to Cannes. They should have turned left at Dijon.

Salade Niçoise
Delia Online
Delia has a British Cookery School and online magazine, as well as an online shop.

Nothing has changed much here over the long years I’ve been cooking and writing recipes — this is still one of the best combinations of salad ingredients ever invented. Slick restaurants often attempt to do trendy versions with salmon, char-grilled tuna and the like, but the original reigns supreme. In Provence lettuce was sometimes used, sometimes not, but I now like to abandon the lettuce in favour of a few rocket leaves.

Serves 4-6 as a light lunch

You need to serve the salad fairly promptly, and needless to say it needs lots of warm, crusty baguette with Normandy butter to go with it.

Salad Niçoise (pronounced nee-suaz) is essentially a French composed salad, much like our American Cobb salad, but with tuna, green beans, and potatoes, instead of chicken, bacon, and avocado. Salad Niçoise hails from Nice, on the Mediterranean Sea, though like so many foods we enjoy here of French origin, has changed a bit to adapt to our tastes. According to the Wikipedia the Niçoise salads are always made with raw vegetables and served with anchovies. Niçoise salads that are served in America are typically served on a bed of lettuce and include cooked green beans and potatoes. According to our Paris insider, the Niçoise salads there are all made with canned tuna. Depending on the establishment here, I’ve had them either with canned or with freshly grilled tuna. Like its American Cobb salad cousin, the Salad Niçoise takes some time to prepare, given all of the ingredients. This is one dish where setting up your mise en place (all ingredients chopped and ready to go) will help the salad come together smoothly.