We spent five days in the Pittsburgh environs while Carol attended her NAEYC conference June 9 — 13, 2007. Due to the fact that it was the week of the U.S. Open at Oakmont Country Club, we were obliged to stay in the sticks at the Pittsburgh Radisson Green Tree, in the Borough of Green Tree, about four miles from Downtown. This is about the eats.

Our Saturday flight to Pittsburgh left at a civilized hour, elevenish. We were on U.S. Air with a United ticket. The flight was smooth, the crew handsome. We shared an empty middle seat and I had all the legroom I needed.

Trouble is, we landed. The baggage claim was a congested, crunched-up mess with five flights on one carosel and the combination of Midwestern-sized people and their like-sized bags.

We called the Pittsburgh Radisson Green Tree for a shuttle pickup,

At least the waiting was in beautiful weather, 72 degrees and sunny.

Our hotel turned out to be a very large hotel in a suburban setting — or one might say, the middle of nowhere. Walk anywhere? Fagidaboutit. Nearby restaurants? Well, there’s the Olive Garden about a mile away, but the roads are narrow and have no sidewalks or shoulders to walk on. It was nearly 9pm local time and we needed food and drink, not necessarily in that order.

Saturday Dinner
Pittsburgh Green Tree Radisson Bar
The Radisson Green Tree sports the River Restaurant, a big barren place, with exactly three tables occupied. No one was there to seat us. I walked around and made some noise and eventually we were seated.

We sat. The waitress busied herself with the three occupied tables and passed us at least three times, not even acknowledging our presence. When she finally came to our table, I asked if the bar had food.

“They have a small menu,” she said.

“Maybe we’ll get some attention there,” I said, and we left.

At least the bar was lively. The hotel was full, and as noted, it’s not that there were choices. Laurie (I later learned her name) and her male colleague were working hard, but we got our drink and then, food, and Laurie was a heavy pour.

When we got our check, the drinks weren’t on it. Laurie said she comped the drinks because of our troubles, and she gave me a FULL glass of bourbon to take back to the room. Thanks, Laurie!

Sunday Breakfast
Hilton
Shuttle buses were provided from “Our Alcatraz” to the Convention hotels in downtown Pittsburgh. Carol left way early for a conference, but I slept in and grabbed the 9:30 shuttle to the Hilton. The Hilton sits nearly at the point of The Golden Triangle. Behind it along Penn Avenue is the Culture District. I walked around a bit to explore, but the Sunday morning sidewalks were deserted.

Sunday Lunch
Primanti Brothers
I kept busy reading in the Hilton lobby until Carol came down for lunch. A nice guy wearing dreadlocks and serving bagels to the amassed NAEYC hoards directed us to Primanti Brothers. It’s a diner kind of arrangement with a counter and booths inside, tables outside on the sidewalk. We took a booth.

Their menu seemed built around French fries. My Super Nacho Chili Cheese Fries consisted of a layer of fries, nachos over that, chili over nachos and cheese over everything, served in a paper lined plastic basket. Yum? Cold Bud in a bottle was welcome.

Carol’s Fish Sandwich: Hoagie roll bottom, lettuce, a breaded fried fish fillet, a huge layer of French fries, thousand island dressing, hoagie top. Wow. She deconstructed it in order to get to the good parts. Oh well, it was lunch, and not hotel food.

Carol had workshops all afternoon and we had dinner reservations at Lidia’s in the Strip District at 7:30. Shuttle buses run 7 to 11 and then 4 to 9, I’m in the dreaded gap and take my first taxi back to Radisson Green Tree ($11) for a nap, a spot of writing and some refreshing.

I had this grand plan, find a bar near Lidia’s where we can watch the final episode of the Soprano’s after dinner. I took the 4 o’clock shuttle bus to the Omni (the other Conference Hotel), to check out the hotel and its environs, walk to the Strip District, check out Lidia’s, and find just the right bar. 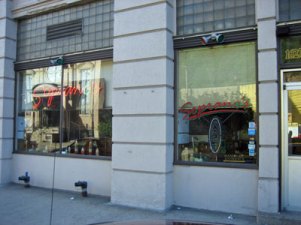 And speaking of The Sopranos, a good part of Penn Avenue in the Strip District reminded me of Tony’s environs in Jersey.

I arrived at Lidia’s a good half hour early for our reservation. Guess what? Carol and Sarah were already at the bar. We could be seated any time.

Nice room. A big loft with a big post and beam structure, exposed and proud. An amazing chandelier hung near the entrance made of melty and bleeding colored wine carafes. It looked like they were fused together in a pear shape with enough heat to distort but not destroy.

The menu featured a prix fixe three pasta dish with Caesar salad and dessert. I wanted that. Fettuccini with a light veal ragout sauce, ravioli filled with goat cheese and spinach, and orachette with white beans, tomato bits and fava beans. Heavenly. The pasta girl came around from time to time to replenish my plate, so I shared liberally with Carol and Sarah.

Ah, but the menu had many other delights. Gnocchi with a very light tomato and duck sauce for — guess who? — Carol, it was the lightest gnocchi I’ve ever tasted. Sarah went for the grilled calamari steaks with fava beans, big Italian lima beans and a smattering of greens. My dessert (shared) included a scoop each of caramel gelato, lime sorbet and vanilla gelato, served on a long plate with a scoop shaped place for each scoop. Just right.

The whole experience was so mellow and right that I’m glad we didn’t have to fret The Sopranos.

And yes, this was worth the trip to Pittsburgh.

After the “My U.S.Open” experience, I was back at the Omni about 10:30, walked around a bit and then went on a tour of Heinz Field, home of your NFL Steelers and Pitt Panthers. After, I had lunch at Jerome Bettis’ Grille 36.

Nice place. There’s a big room with the bar and some tables to the right of the entrance and a dining room to the left. The design is clean and modern, but comfortable, and flat screen TVs abound, most turned to ESPN or ESPN2. The servers are young women with yellow push-up halter tops, black stretchy tube tops over that (the better to disguise some Midwestern chubbiness), and black pants. Everyone was really nice.

The Heinz Field tour was long and hot, so I chose a Caesar Salad with shrimp added and a Blue Moon draft. The salad and beer were perfect for the occasion, but the small shrimp had been put in the deep fryer and forgotten. Should I expect Jerome Bettis to know how to cook?

Monday Dinner
Original Fish Market, Weston Hotel
The street entrance is on the corner of the hotel and the restaurant “L” shaped with long, rather narrow legs stretching out. I thought we were being taken to Siberia, but the design is good in that there are attractions — bar, raw bar, fish tanks and such — along the way. We were seated across from the open kitchen by a window looking onto the street.

We had fish.
I chose a cup of seafood gumbo and the Catfish special; Carol the Halibut special; Sarah a cup of Blue Crab Bisque and the Swordfish. The food was good. Our server, Holly, was efficient, but, I mentioned that we were pleased with her service, but would enjoy a smile. She confessed that she was near the end of a double shift. “I’m nearly 30, can’t take that anymore.” We were glad to see that she perked up after that.

All in all, not a bad dinner, but much more expensive than Lidia’s.

On the way back to the Omni to catch a shuttle to the Radisson Green Tree, we observed many and diverse manhole covers.