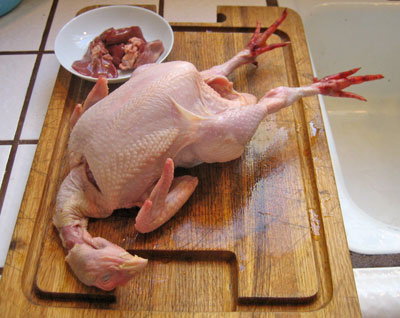 So I bought a chicken and Carol said, “Yuck, its got feet. It’s not very big, what are you gonna do with it?” I was thinking fried chicken; she suggested poaching. I don’t want to poach it, such a mundane fate for such a fine bird.

I read Bill Neal‘s recipe and commentary on Southern Fried Chicken. His book Southern Cooking is one of my treasures.

He’s very particular about his fried chicken. “You want chicken that tastes like chicken, with a crust that snaps and breaks with fragility — a contrast to the tender, moist meat.” He goes on, “First, the bird: only a whole, fresh chicken will do. (Frozen chicken tastes bloody and turns dark at the bone when fried. If you find yourself in the possession of one, stew it or bury it.)”

I had the right bird, but I have this phobia of cooking with a lot of fat — he demands a cup of lard plus 1 1/2 cups of peanut oil. What does one do with the leftover oil?

So I thought about chicken with rice. I’ve never cooked it, but I have savored it in Cuban restaurants of Tampa and Miami. Out of all my cookbooks, I could find only one recipe; in Staff Meals from Chanterelle, the New York City restaurant, by David Waltuck and Melicia Phillips. Theirs is called Dominican Chicken and Rice. It didn’t appeal to me, so I Googled Arroz con Pollo and downloaded three recipes. The one that seemed the most straightforward and appealing was from Simply Recipes, a food blog that I have often visited.

As is often the case, “The beginning is the half of every action.” [Greek proverb] The rest was easy, butcher the bird, follow the recipe, serve and enjoy. I made a simple chopped salad of endive, cucumber and tomato as accompaniment.

My Arroz con Pollo came out well, the meat was tender and moist, as was the rice, but it was bland, lacked oomph, I put Crystal hot sauce on mine, C augmented with soy sauce. Needs herbs and/or spice. Maybe the paprika should go in the rice rather than in the dredging flour. Melissa Kelly says some flavorings of Spain are sage and rosemary. The recipe calls for tomato paste, maybe mix tomato salsa into the rice. The other recipes had a bay leaf.

I can experiment with the leftovers, but jacked-up a little, that was a fine dinner. The wine is Davis Bynum Rose, a soft fruity wine that goes well with the rich chicken dish. 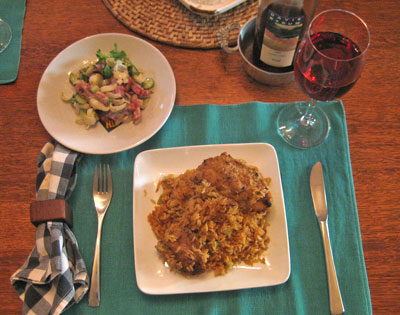 Arroz con pollo means, “Rice with Chicken” in Spanish. It is a classic dish of Spain and Latin America, with various ways to prepare it. This is my mother’s basic arroz con pollo recipe, which she adjusts depending on her mood and what she has on hand. For instance, she might substitute chipotle chile powder or red chile powder for the paprika. We never use saffron in our arroz con pollo, but many people do. You can also add chopped bell peppers (cook with the onions) or peas (mix in at the end). It’s an easy, stove-top, one pan dish, great for family meals.

1 Heat 3 Tbsp olive oil in a large skillet (a skillet that has a cover) on medium high heat. Put the flour in a wide bowl, mix in a generous sprinkling of salt, pepper, and paprika. Dredge the chicken pieces lightly in the flour mixture and put in the pan to brown. (You can skip the flour dredging part if you want. It just makes a nicer coating for the chicken.) Cook a few minutes on each side, just enough so that the chicken has browned. Use a slotted spoon to remove from pan and set aside.

2 Add the rice to the pan to brown. Add a little more olive oil if necessary. Stir first to coat the rice with the olive oil in the pan. Then don’t stir too much or you will prevent it from browning. Let it brown and then stir a little to let more of it brown. Then add the onion and garlic. Cook the onion, garlic and rice mixture, stirring frequently, until the onions have softened, about 4 minutes.

3 Place the chicken pieces, skin-side up, on top of the rice. In a separate bowl, mix together the stock, tomato, salt, and oregano. Pour the stock mixture over the rice and chicken. Bring to a simmer, reduce the heat to low, and cover. Let cook for 20-25 minutes, depending on the type of rice and the instructions on the rice package, until the rice and chicken are done. Fluff the rice with a fork. If you want you can sprinkle with some peas. Add more salt and pepper to taste.